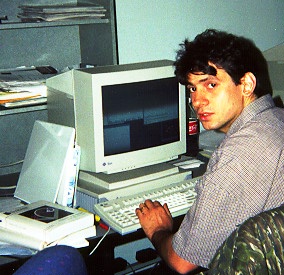 Three years ago I was working as a C++ programmer at the Wall Street headquarters of a huge and elite international bank. My cube was on the sixth floor, and the marble frieze of the New York Stock exchange loomed outside my window.

I hated this job. It was the kind of place where people sniffed at you if they didn't like your suit. The programmers there thought they were hot stuff, and liked to prance around claiming they were "the best in the world". What a laugh! I'd spent the previous five years designing 3-D vision systems for a robotics firm on Long Island. Compared to that work (for which I was paid much less), my new assignments were so easy I could barely stand to do them.

I'm not saying I'm a great programmer -- I'm average. But I'm used to pushing myself hard and producing a lot, and all my new co-workers wanted to produce was reams of documentation about schedules and development environments and design methodologies. When it came time to actually make something happen, they were clueless. So I would ace my part of a three-month deadline in one month, and since I had nothing else to do for the next two months I began surfing the Web. I surfed the Web a lot. Eventually I got sick of looking at other sites and decided to start my own, and this is how Literary Kicks got created.

It was a strange situation, a peculiar mix of confinement and liberation. I used to take breaks from writing Web pages and take walks, and I think I walked every street and alleyway of Lower Manhattan. One day I hopped on a ferry during lunch hour and rode to the Statue of Liberty. I walked up the echoing circular staircase to the statue's crown, looked out over New York Bay, walked back down the clanging stairs, rode the ferry back, returned to my cube at 3:15, banged out ten or twelve lines of C++ code, and fired up Mosaic (the original web browser, in the days before Netscape) at 3:30. In a way, this was a great life.

But I was miserable. There are few things more depressing than a boring job, especially a boring job where people wear expensive suits and office politics hangs in the air like a cloud of poison gas. I don't think anybody else there was much happier than I was. It is a telling fact that none of us ever read Dilbert. We could not stand to; we were living Dilbert.

I suppose I shouldn't tell you the name of this bank, now that I've thoroughly dissed their technical staff. It just wouldn't be right. But what the fuck -- I don't work there anymore. Here's their home page.

It was my Web work that ended up saving me. In June '95 I was hired by a major media/entertainment company to work on their new Web-based online service. Now I'm working long hours, using perl and Java instead of csh and C++, and participating in some truly exciting, adventurous and suspenseful projects. I love it here. Best of all, programmers aren't required to wear suits and ties, and in the summer I can even get away with a t-shirt, sneakers and shorts. Goodbye, Wall Street. Go write some documents ...

Anyway, now that I've vented all my pent-up hostility ... here's some of the stuff I do in my spare time. I'm pretty heavily into digital video, and I recently created a 64-minute CD-Rom movie, Notes From Underground, based on Dostoevsky's novel about vanity, conformity and class warfare in 19th Century St. Petersburg, Russia (I updated it to modern-day Manhattan, which seemed like a perfect fit to me). I'm selling this CD-Rom for $12.00, the first official Literary Kicks publication, and you can purchase it either online or offline via the link above. I worked on this thing for two years and I really think you won't be disappointed if you give it a try.

In the summer of 1997 I co-edited the first anthology of internet writing published in book form, 'Coffeehouse: Writings From The Web', published by Manning Books.

I also do a lot of web-based writing myself, and the work I'm proudest of is probably Queensboro Ballads, which I finished in the summer of 1995. I've also published poems and stories on the web in InterText and Enterzone, two extremely good, long-running outposts of internet-based creativity. I also occasionally perform at live poetry/fiction readings, and once in a while I help arrange one too, although I prefer it when somebody else does the arranging (it's a lot of work!). 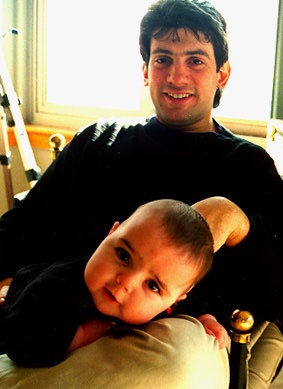 My wife is also a writer, and her web pages are here. She and I are an interesting couple, because we each belong to separate virtual societies dedicated to utopian cultures: I'm a Deadhead and she's a Trekker -- yes, there are still Deadheads and Trekkers, even though Jerry Garcia died and "Next Generation" went off the air. I'm also listening to Phish a lot lately, as well most other forms of music from hip-hop to punk to folk. As everybody who knows me knows, music is a big part of my life.

I also read a lot. Here's the list of my fifteen favorite novels.

My email address is brooklyn@litkicks.com, but I should say that I've been very swamped with email lately, especially as I've got some tight schedules at work, my CD-Rom movie just came out, and lately I'm barely getting time to see my kids some days ... so I'm trying to spend a little less time pounding away on the computer, at least for a while. I do like getting interesting emails, but I sometimes need to take a few days or weeks to write back. I also know (all too well) that many of my pages are out-of-date. I will get around to all of them occasionally.

If you want to see what I was like back when I hated my job, and also see a picture of my oldest daughter and find out what musicians and TV shows and world religions I like, here's my old home page. I keep it around because I'm just a sentimental kinda guy.

If you're interested in my technical environment: I do all my Web work in Unix, and write my pages in raw HTML using the 'vi' text editor. There is no spell-checker in 'vi', which is my ready-made excuse if you find any errors. I'm proud to say that no Microsoft products assisted me in the building of my Web pages -- that's not to say that I didn't use them, but just that I don't remember them ever assisting me.

Thanks for listening! I try not to say 'fuck' more than once per page. See you 'round the Web ...